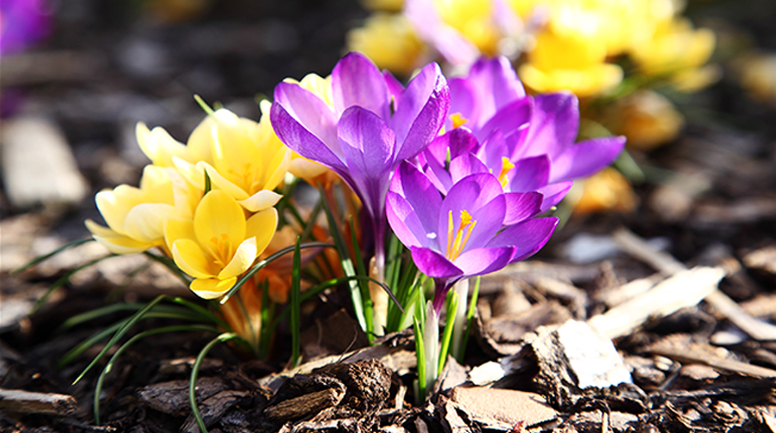 What’s your fall planting strategy? If you’re planning to add a few small trees and shrubs, then your yard will be spectacular. But why not go a step further and plant bulbs? You’ll be among the thousands of gardeners who are thinking ahead to the glory of spring color, because a bulb is no less than a promise of spring. And if you plant minor bulbs, you can take your garden to the next level.

Minor bulbs are easy to grow, are wonderful companions to other bulbs and perennials, and they repopulate readily to form lush carpets of color. As a bonus: Many of them bloom long before other plants, making them truly heralds of a new season.

If you haven’t already planted these in your own garden, it’s likely that you’ve seen them in parks, parkways, wooded areas, and your neighbor’s yard. Minor bulbs don’t often stand out on their own, but when planted en masse, the effect is stunning. That river of blue you see meandering among the trees? That’s probably Muscari, or grape hyacinth. Those delightful little stars sprinkled along the walkway? They could be Puschkinia.

The selection of minor bulbs is vast, but recommended here are some of the most commonly used options and a local garden center professional can help further select the bulbs perfect for you. Each is ideal for a small, intimate garden, planting among trees and shrubs and lining walkways and paths. There’s really no limit to planting minor bulbs – use your imagination! 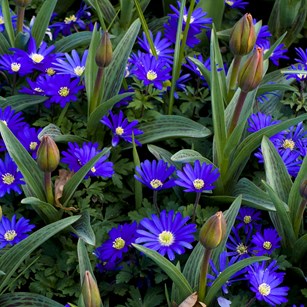 The small, rayed blossoms of Grecian windflower are reminiscent of ice plant flowers, as well as larger varieties such as astersand daisies. Colors range from blue and purplish red to pale pink and white, and they sit low atop lacy, almost fernlike foliage. Flowers grow from fleshy, knobby tubers – not the typical bulb – but they’re planted and tended just like common bulb plants. Windflower will spread over time to form a lush and lovely carpet of flowers, so give the plants room to naturalize.

This sweet little flower is among the first to bloom in late winter to early spring, often emerging before the snow has cleared. Each bulb pushes up two to three narrow leaves and one slender stem that supports a raceme of two to three upward-facing, six-petaled, soft blue flowers that sport white centers. Glory-of-the-snow naturalizes well and is suitable for rock gardens, small slopes or beneath large deciduous trees.

Homeowners love crocus, and the variety of colors seems to be nearly endless. But critters love crocus, too, and the bulbs are especially tempting to squirrels and other rodents. Crocus tommasinianus (tommy crocus), however, have proved to be more resistant to these little thieves, and they’re just as jubilant as their more common cousins. Goblet-shaped flowers of pale lavender to deeper, reddish purple feature white throats and happy yellow to orange anther and stigma. And they tend to flower slightly earlier than Dutch hybrid crocuses, so planting among other varieties will provide a sequence of bloom. 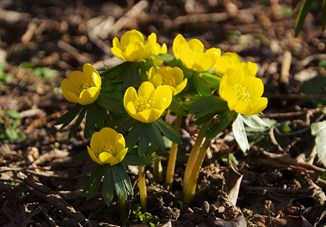 As you might guess from the name, winter aconite is among the very first of the minor bulbs to bloom, popping up in late winter and shining a spotlight of yellow on the darkened garden. Most bloom even before the crocuses emerge. Stalks of three to four inches reach through the snow to support buttercup-like flowers, each wearing a collar of green, leaflike bracts. This plant has a tendency to be aggressive, but judicious siting can keep it in check.

One of the most unusual – and amusing – minor bulbs is checkered lily. It’s related to the much larger Fritillaria imperialis, a rather tropical-looking plant, but it bears little resemblance. Topping out at about one foot tall, very slender stems support one nodding, bell-shaped, checkered flower. Amazingly the reddish purple flowers feature a checkerboard pattern that cannot help but stand out among more subtle spring blooms.

Snowdrop is among the earliest to emerge in late winter, often in February, making this tough little plant a promising sign of spring. Lovely, white wings form the small, nodding flowers; each bloom features six tepals. Three are long and three are short, and the shortest are painted with small green chevrons. This sweet little selection is easy to naturalize and performs well under deciduous trees as well as in rock gardens and along garden paths.

Many are familiar with grape hyacinth, and for good reason. Like most bulbs, it’s easy to grow, it’s long-lasting, and it’s resistant to most insects and pathogens. But it’s the stunning flower color that can stop traffic and cause neighbors to ask, “Where did you get that?” Planted en masse, it creates a sea of brilliant blue that weaves its way throughout lawns and wooded sites. Each bulb produces one to three flower scapes, each densely packed with up to 40 tiny, roundish flowers. The effect is of an inverted bunch of grapes; thus the common name. A cousin, Muscari latifolium, features two-toned flower scapes, with deep purple blooms at the bottom, topped by lighter, soft violet-blue.

Pale blue to white flowers are finely detailed with narrow, dark blue stripes in early spring. The small flower scapes tend to resemble that of grape hyacinth, if the tiny pearls had popped open into star-shaped blossoms. Because the flower color is delicate, Puschkinia is best planted in masses among darker-leaved plants such as evergreens. They’re ideal for areas where naturalizing is desired because they’re eager to spread.

Many homeowners are familiar with the standard selection of bulbs, including tulips, daffodils, iris and allium. They’re among the most commonly planted in American gardens. But did you know that there are smaller varieties of these workhorse plants? Just as hardy and easy to grow, these minor bulbs are a delight in smaller spaces. 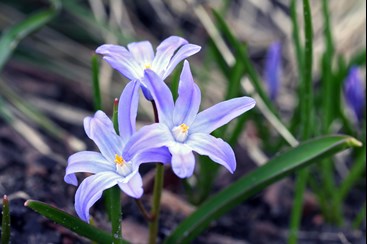 We normally think of Allium (ornamental onion) as a tall, proud plant that features a slender stalk topped by a large, round, balloon-like bloom, and that’s true, but there are shorter versions that are just as showy.

Allium karataviense is a compact and sturdy plant that grows to about 12 inches tall and produces showy foliage as well as flower. Broad, gray-green leaves – each about 3 to 4 inches wide by 6 to 9 inches long – may be mottled with purple hues. A single flower stem is topped with a dusky pink, spherical bloom composed of tiny, star-shaped florets. The plants may spread in time, but they’re not considered aggressive.

Among the hundreds of gorgeous iris varieties, this sweet, small version holds its own. It stands only about 6 to 8 inches tall, but its fragrant blooms rival the tallest of its cousins. Proud, purple flowers featuring gold crests and white streaks on their darker purple falls while some selections bloom in a rich, red-purple hue with similar accents. Flowers emerge at about the same time as early crocuses, snowdrops and glory-of-the-snow, providing a jubilant bouquet in the early garden.

There’s a universe of tulips out there, and species tulips are among the lesser known stars. Greigii tulips echo the appearance of taller varieties but feature beautifully mottled foliage. Kaufmanniana also are shorter plants, but the brilliant color selection and flower forms more than make up for lack of height. All tend to perform well in groups and can be sited where they’re allowed to naturalize. One particular favorite is Tulipa tarda, a very low-growing selection that produces a cluster of three to six, cup-shaped, whitish flowers that open to reveal a yellow eye. Once opened, they remain in a broad, star-like presentation.

In general, you can plant minor bulbs just as you would regular bulbs: