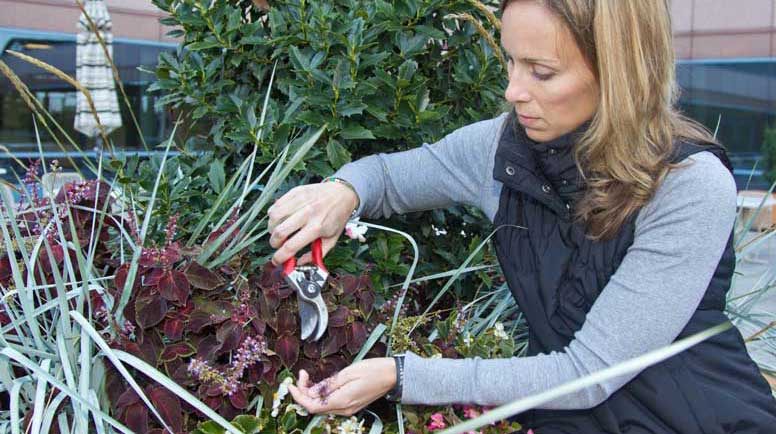 All shrubs need pruning from time to time to keep them tidy, remove dead branches, open up the interior for good air circulation, and encourage more vigorous new growth.

For most shrubs—those that don’t have evergreen needles—the best approach to pruning is branch by branch, using a sharp pair of pruners. This technique is called selective pruning. It’s different from shearing—shaving off the outer few inches of a bush with a power hedge trimmer or shears to create a smooth, geometric shape. That’s an approach best used only on formal hedges.

Here are some steps for shaping up a shrub by selective pruning:

Know what you’re pruning. A basic step is to identify the shrub so you can find out its natural form and characteristics. An informed landscape contractor or professionals at a garden center or botanic garden can help you identify mystery shrubs and plan for their pruning.

Get rid of dead wood. It’s normal for some branches and twigs to die on a shrub. You can tell a branch is dead if you make a small nick in the bark and don’t see green underneath. Dead wood also is brittle and breaks with a sharp snap. Remove dead twigs back to the nearest live branch. If an entire stem is dead, cut it off close to the ground.

Make close cuts—but not too close. Prune each branch back to a branch node, the place where it joins another branch. Make the cut just above the joint, leaving no more than a 1/8-inch stub. But don’t cut into the branch you’re planning to leave. Pruning this way will redirect water and other resources to the branches you keep. Don’t cut midway between two branch nodes or leaf nodes; this will stimulate the plant to grow unsightly fluffs of twigs.

Remove conflicting or crossing branches. Look for places where one branch is rubbing on another or running into it, or where there will soon be conflict as both branches grow. Choose one branch to keep—usually the one that is headed toward the outside of the shrub—and remove the other.

Eliminate a few of the largest, oldest stems. Cut them out right down to the ground. This will encourage new growth, which is usually more vigorous. You may need to use a pruning saw for big, old stems.

Respect the shrub’s natural form. Some shrubs have a fountain-like or vase-like form, with arching stems growing up from the base. Forsythia and bridal veil spiraea are common examples. Other shrubs, such as boxwood and dwarf fothergilla, have a naturally bushy, rounded form. Prune to emphasize and enhance the shrub’s natural shape, not to change it.

Control the size. To reduce the size of a shrub, first identify the longest branches. Cut each long branch back to a branch node. This will bring the shrub down to size while keeping its natural form.

Pause and check. As you prune, step back often to make sure you aren’t taking too much off; that your pruning cuts are evenly distributed; and that you are keeping the shrub balanced and attractive. Don’t remove more than one-third of the shrub in any one year.

Cut too much? Don’t panic. Most shrubs will grow back and fill in within a year or two.